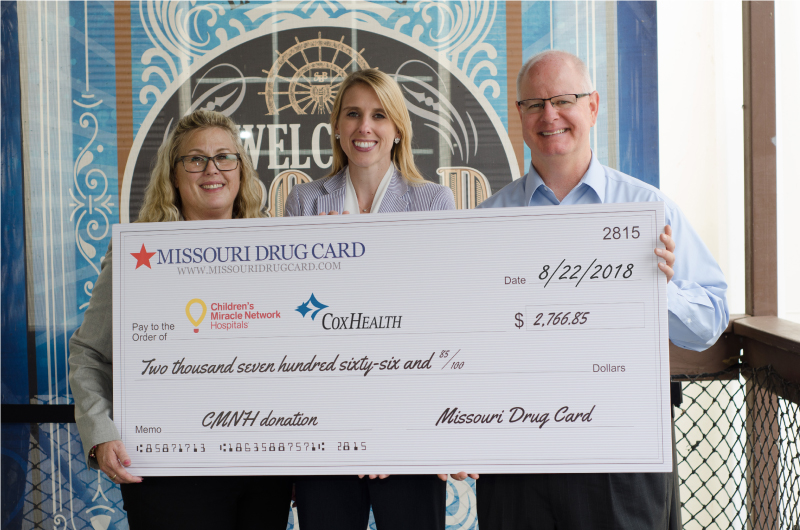 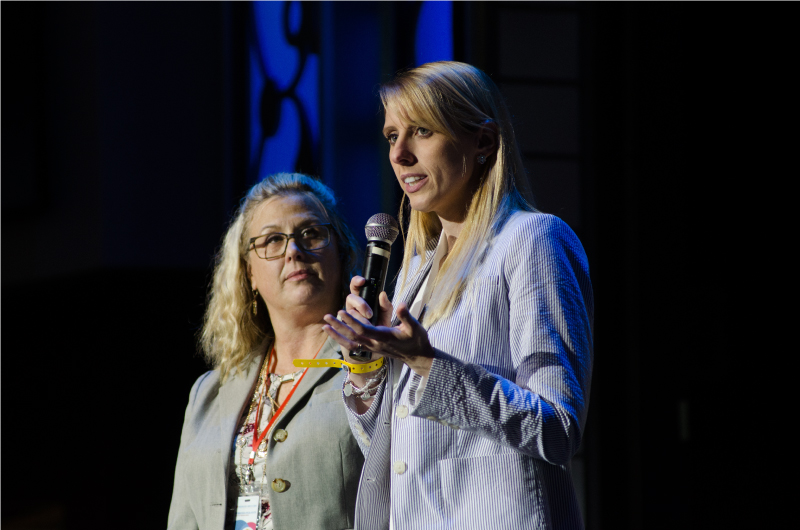 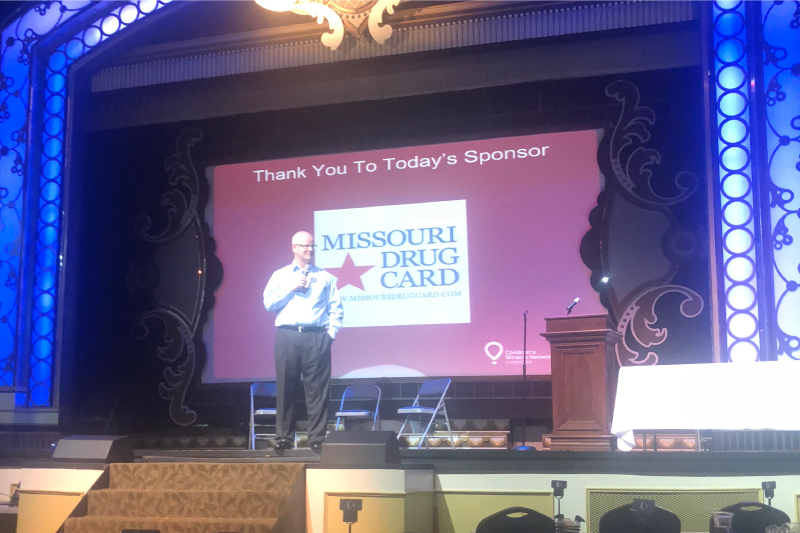 Since 2015, the United Networks of America partnership with Children’s Miracle Network Hospitals has raised over $2.4 million dollars for local children’s hospitals. Of this, $2,766.85 has been raised for CoxHealth. 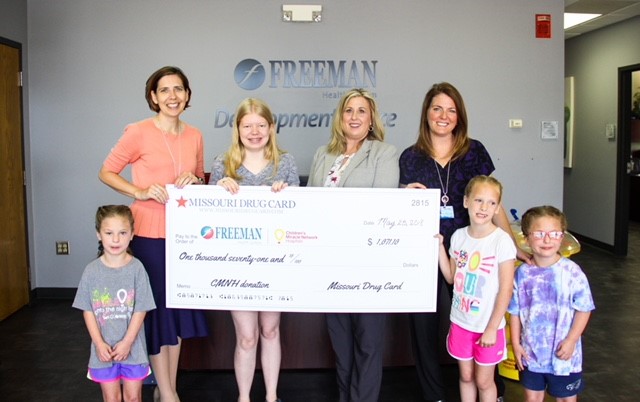 Since 2015, the United Networks of America partnership with Children’s Miracle Network Hospitals has raised over $2.4 million dollars for local children’s hospitals. Of this, $1,071.10 has been raised for Freeman Health System. 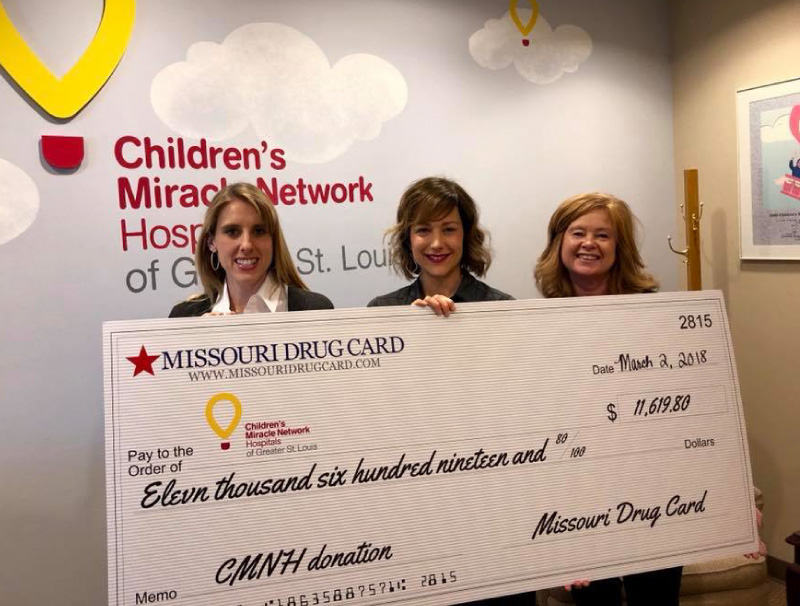 Unlike many CMN organizations Children’s Miracle Network of Greater St. Louis provides funding for both St. Louis Children’s Hospital and Cardinal Glennon Hospital in St. Louis. We have had the chance to tour both hospitals but on this day Missouri Drug Card presented a check that will help provide life-saving treatment and advance the mission of the hospitals in supports.

Residents of Missouri now have some extra help paying for their prescription drugs.

The card is free and provides savings of up to 75 percent on prescriptions drugs with an average savings of around 30 percent.

Former Missouri Supreme Court justice Ronnie White is serving as program director for the Missouri Drug Card and says the program is open to every resident of the state.

"This is important," says Judge White. "There are no income limitations, no age restrictions, and no applications to full out everyone in the state of Missouri is eligible to receive a free discount prescription drug card through this program 4:37

The program even covers some pet medications at participating pharmacies.

For more on how to get a Missouri Drug Card, visit any Schnucks or K-Mart pharmacy or click on the link on the right side of the page.

(Carthage, MO) – A new statewide discount drug card program promises to save consumers an average or 30 percent on prescription drug costs while helping pharmacutical companies by keeping people from going to Canada for their prescriptions.

"The pharmacies and pharmacutical companies realized they had to do something proactive to prevent market share from going to Canada," said Robert Meyer, development director for the Missouri Drug Program. "This type of programs enables people to keep their prescriptions at home."

According to Meyer, the Missouri Drug Card is a free drug card available to everyone in Missouri without exception. He said it is funded completely by the pharmacutical companies, no public or tax money is being used in the program.

It's available to people who sign up at the Web site, www.missouridrugcard.com, and Meyer said the information people provide on the Web site is protected by the same federal legislation that protects the privacy of anyone seeking medical care.

"The information is protected by HIPPA laws," he said. "There is no way it can be shared or sold or disseminated in any way."

Meyer said the program, which is free to all Missourians, will provide savings of up to 75 percent on prescription drugs with average savings of about 30 percent. There are no restrictions to membership, no income restrictions, no age limit and no applications to fill out.

The Missouri Drug Card Program was launched to help the uninsured and underinsured citizens of Missouri afford their prescription medications. However, people who have health insurance coverage with no prescription benefits, which is common in many health savings accounts and high-deductible health plans, can also use the program.

Additionally, people who have prescription coverage can use this program for non-formulary or non-covered drugs.

Meyer said the Missouri Drug Card can also be used by individuals who do not qualify for publicly funded programs such as Medicaid and Medicare. It can also be used by people who receive their medicines through charity care providers such as 340B, a federally funded program that grants discounts to providers, and require a drug that is not available to them. This program even covers some pet medications that are available at participating pharmacies.

The Missouri Drug Card Program has no restrictions or participation requirements and is open to every resident of Missouri.

"I am so proud to be a part of the Missouri Drug Card. The people of Missouri need a program like this to help offset rising prescription costs," White said. "This program will help a lot of people and I feel privileged to be a part of this State wide initiative."

A prescription-drug discount card launched Tuesday will give many Missourians-regardless of age, income or insurance-discounts of up to 75 percent on hundreds of brand-name and generic medications.

The average savings is expected to be about 30 percent, according to promoters of the card. Patients can sign up online or at a Schnucks or Kmart Pharmacy. Those pharmacies also will be instructed to tell patients about the program if they haven't heard about it.

The card is accepted at more than 50,000 national and regional pharmacies, including chains such as Walgreen Co. and smaller independents. Lists of participating pharmacies and drug prices are available at www.missouridrugcard.com

Similar programs, run by the same private company and funded by drugmakers and pharmacies, already operate in about two dozen states. The first launched about two and a half years ago.

The company, United Networks of America, plans to start a program in Illinois by year's end, said Ryan Jumonville, its chief executive. United Networks is based in Baton Rouge, La.

While the drug-card program was started to help the uninsured and under-insured gain access to expensive medications, it also can be used by people with medical coverage. But patients cannot use both discounts for a single prescription.

Many high-deductible plans do not include pharmacy coverage. And, as more pharmacy-benefit plans restrict access to certain medications, patients could use this card to obtain discounts on those drugs. In a few instances, according to a quick comparison with Drugstore.com, there were no savings using the Missouri Drug Card.

The card also can be used for patients who are covered under government programs or through charity care providers. They, too, would have to choose which discount to use for a single purchase.

Pat Smith, 74 and a resident of bridgeton, has Medicare prescription coverage but still feels her asthma inhalers are too costly. "I have to pay big bucks for them." she said.

Smith has signed up for other discount drug cards in the past, only to realize that her medications weren't covered. So while this program might be helpful, she is concerned that the same frustrations will arise.

With this program, patients who require brand-name medications and were discouraged by drug cards that focused on generics might find more help.

United Networks runs the plan through its pharmacy-benefit management division UNA Rx Card. The program works similarly to other pharmacy-benefit plans, such as those used by employers and unions.

Jumonville said that in the case of this program, the motivations were different. Some patients were going to Canada to find less-costly medications, and he said those trips are becoming less frequent in teh states where this program exists.

Pharmaceutical companies, he said, "realize that they need to do something here in the States."

Meanwhile, he said, retail pharmacies are losing market share to mail-order pharmacies. This program brings more customers into their stores while building good will.

Jumonville said the Missiouri Drug Card will not sell patient kinformation or try to steer patients to certain medications. Differences in discounts, he said, are based on market conditions.

When UNA started its first drug-card program in Louisiana, it found challenges. Income restrictions and paperwork discouraged many people from applying, Jumonville said. So UNA made the process easier by allowing some pharmacies to process membership cards.

Details About The Drug Card

Who is eligible?
All Missourians are eligible. There are no income or age restrictions.

How do I enroll?
There is no application process. Just print out a card at www.missouridrugcard.com. Those without access to the Internet can go to a Schnucks pharmacy or a Kmart pharmacy.

Who pays for the discounts?
The program is funded by pharmacies and drug companies.

Which medications are covered and how big are the discounts?
A complete list of the medications and their prices is available at www.missouridrugcard.com.